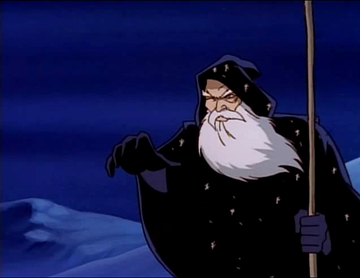 Odin in his cloak of stars. 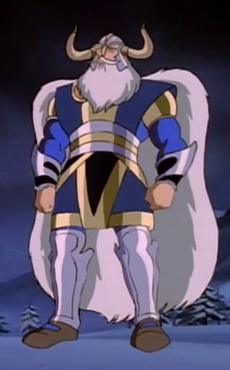 Odin in his battle armor. 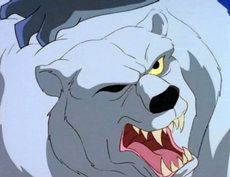 Odin in his bear form.

Odin is a Child of Oberon, and the leader of the Aesir branch of the Third Race. [1]

At some distant point in time, Odin gave up one of his eyes for a drink from Mimir's pool to gain greater wisdom, which later on became the Eye of Odin. [2] While Odin indeed gained the wisdom that he had so desired by this sacrifice, he also lost some of his innate magical strength thereby.

Before the Vikings and other people of Scandinavia were converted to Christianity, they worshiped Odin and held him to be a god, indeed, the most powerful of their gods. Even nowadays, the inhabitants of Norway still remember him, and the children there have even read about him and his fellow Norse gods in school, although they do not suspect him to be real.

When Goliath and his companions came to Norway on the Avalon World Tour, Odin sought them out, and tried to obtain the Eye of Odin from Goliath, first by offering to trade a warm coat for Elisa to wear in exchange for the Eye, and then attempting to seize it from Goliath by force in his polar bear form. When both attempts failed, Odin in desperation kidnapped Elisa to use as a hostage. In equal desperation, Goliath donned the Eye of Odin to increase his power, becoming a quasi-avatar, and strong enough to vanquish Odin. [3] However, in the process, he became corrupted by the Eye, and changed his goals from protecting his companions (although he still claimed to be doing just that, and may have even believed it) to battling Odin over ownership of the Eye. Odin was brought to the point of near-defeat, but used his last ounce of strength to free Goliath's companions from the cave where Goliath had imprisoned them so that they could bring him to his senses. After Goliath realized what he had become, he relinquished the Eye, which Odin reclaimed. He replaced it in his eye socket, so that it became a part of him once more. He afterwards apologized to Goliath and his friends for the trouble that he had earlier caused, ruefully admitting that he was somewhat out of practice in dealing with mortals, and rode away up the Rainbow Bridge. ("Eye of the Storm")

Like the other Children of Oberon, Odin soon afterwards returned to Avalon for the Gathering. There he entered into a brief fight with the Banshee, before Oberon intervened and brought it to a sudden end. ("The Gathering" Part One)

Odin usually looks like an old white-bearded man, sometimes dressed in a black hooded robe studded with starry glints, sometimes in a "fantasy Viking" outfit of furs, armor, and horned helmet. However, he can take on the form of a polar bear at will, as well. While he was missing his eye, every form that he took on, whether human-like or bear, had only one eye to mark this. The exchange of Odin's eye for wisdom created a mystic restriction, preventing any form Odin took from having a right eye. [4]

Odin can control the weather, usually in such a way as to produce snowstorms, no doubt thanks to his being a "god of the north." He is also a death-god, like Anubis. [5] He often rides his horse Sleipnir, when interacting with mortals. 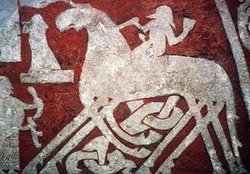 Odin was the chief of the Norse gods or Aesir, and was worshiped not only by the Scandinavians of Norway, Sweden, Denmark, and Iceland under that name, but also by the Saxons as Woden or Wotan. (This form of his name has given rise to the day of the week "Wednesday," which is a whittled-down form of "Woden's day".) He was the favorite god of chieftains and poets, although the common people preferred Thor. Kings and noblemen among the Norse and Germanic peoples prior to their conversion to Christianity even traced their descent back to Odin, as did the various Saxon kings in England, for example. Today there are only a few small groups of remaining Pagans who still worship Odin and the other Aesir.

Odin had a great thirst for wisdom. To gain it, he not only gave up an eye for a drink from Mimir's Well, as per Gargoyles, but even hanged himself from the World Ash-Tree of Yggdrasill to gain even greater knowledge. Alongside his horse Sleipnir, he also had two pet ravens, Hugin and Munin, who would daily fly through the world and report back to Odin on all that they had seen and learned, and a pair of pet wolves, Geri and Freki. In battle, he wielded a great spear named Gungnir, which had been made for him by the dwarves.

While Odin spent much of his time holding sway in Asgard, and in particular, presiding in his great hall of Valhalla, he also spent much time in the human world, often disguised as an old traveler, leaning on a staff (the form that he assumed in Gargoyles when he first met Goliath and his companions). He would visit various households, sometimes to dispense wisdom to his hosts, and at other times to engage in a riddle-game with them. Odin always won these games by making his last riddle, "What did Odin whisper in the ear of his dead son Balder?", which, of course, only he could answer (shades of the ever-popular question among Gargoyles fans of what Titania whispered in Fox's ear!).

Odin was not only the chief of the Norse gods, but also a death-god; he had custody over the souls of warriors slain in battle. These souls his handmaidens, the Valkyries, brought to his feasting-hall of Valhalla in Asgard, where they lived a life of eternal feasting and battle; Odin kept them in his service for the time of Ragnarok, where these warriors, known as the Einherjar, would help him and the other Aesir in battle against their enemies, the frost giants and monsters. Odin would often arrange for the finest warriors to be slain in battle by inferior men in order to recruit them for the Einherjar, something that did not make him particularly popular among many of the Vikings.

Despite these precautions, however, Odin's forces would still be overwhelmed at Ragnarok when it came, and he himself would be devoured by the Fenris-wolf (Greg Weisman has stated that some form of Ragnarok has already taken place in the Gargoyles Universe, although not quite as devastating as the Norse myths claimed). [6] Presumably, if Odin was eaten by the Fenris-wolf during it, he was not permanently swallowed, but was freed from the wolf's interior afterwards. The Norse myths state that his son Vidar would slay the Fenris-wolf afterwards by ripping it asunder, and perhaps in the Gargoyles Universe this deed freed Odin.