Difference between revisions of "Orpheum Theatre" 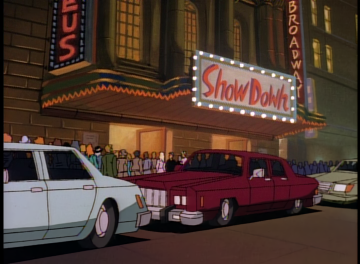 The Orpheum Theater is a movie theater located in New York City at Times Square.

In late 1994, Broadway attended a showing of the movie Showdown at the Orpheum Theatre before visiting Elisa Maza at her loft in Soho. ("Deadly Force")

In early 1995, the trio attended a showing of the Disney classic Bambi at the theater as Coldstone attacked Times Square. Xanatos, and Demona directed the battle from atop the Orpheum Theatre before Goliath was able to negotiate a different battleground. ("Reawakening")

The name "Orpheum Theatre" doesn't show up in the series itself, but rather in the background memo for "Reawakening". Presumably, it was named for Orpheus, musician, poet and prophet in Greek mythology.