Difference between revisions of "Outfoxed" 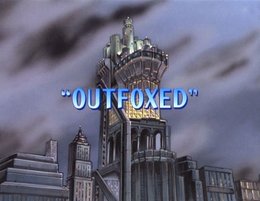 "Outfoxed" is the twenty-seventh televised episode of the series Gargoyles, and the fourteenth episode of Season 2. It originally aired on September 28, 1995.

Fox hires Halcyon Renard's right-hand man, Preston Vogel, to sabotage the Cyberbiotics flying airship Fortress-2 on its maiden voyage so that Fox could gain control of her father's company. Vogel reprograms the cybots that run the ship to change its heading so that it would collide with the Cyberbiotics Tower. Renard ignores Vogel's pleas to abandon the ship, and is determined to save it or die tyring. Goliath, who was captured by Renard earlier while following Fortress-2, aids him by disabling the renegade cybots. Vogel chooses to help Renard override the course of the ship at the last minute, having too much respect for the man to destroy him along with the ship

Travis Marshall interviews Vogel about the Fortress-2, who tells him about the newly patented cybots taking the place of a human crew. It is revealed that Renard had invested his entire company fortune on the ship and he would lose everything if he were to lose it as he had lost Fortress-1.

Goliath follows Fortress-2 by air, afraid that Xanatos had planned to do something to bring it down. He is taken for an enemy and captured by Renard, who believes he was created by Xanatos and Gen-U-Tech labs. Renard reminds Goliath of the damage he and Demona inflicted upon Fortress-1, and manages to persuade him to admit his wrongdoing and apologize. Goliath is released after he helps Renard defend his ship, and offers his friendship.

Xanatos is surprised by Fox's nonchalant attitude and the ruthless way she plans to take over her father's company, but she's nonplussed by his concern.

Goliath forces Vogel to confess his crime and clears his own name from blame for the sabotage of Fortress-2. Renard has become jaded with humanity after Vogel's betrayal, but Goliath reminds him that Vogel made the correct and honorable choice in the end.

Fox isn't upset that the sabotage failed, as she enjoys the game more than the end results, in this case her father's company. Fox breaks into the airship and reveals to Renard that she's pregnant, providing the first indication of Alexander Fox Xanatos.

"A gargoyle doesn't whine. He ROARS!" - Renard and Goliath

"Didn't I mention them? I suppose it slipped my mind." - Xanatos and Fox

"I'm glad you're gargoyle enough to admit it." - Goliath and Renard

"My Angel of the Night."
"Well, perhaps you do know after all." - Renard and Goliath

"No. We are friends." - Renard and Goliath

"Hello Daddy. Almost got you that time, didn't I?" - Renard and Fox

Travis Marshall appears again, to interview Vogel on the eve of Fortress-2's launch.

Renard mentions that Owen and Sevarius were both originally Cyberbiotics employees but were lured away by Xanatos (from what we know of Owen and Sevarius, Xanatos probably didn't have to try very hard).

Renard recognizes Goliath (and gargoyles in general) from video footage of them destroying his facilities in "Awakening Part Four" and "Awakening Part Five". He initially assumes that they are creatures that were created by Gen-U-Tech, perhaps in reference to the Mutates (created in "Metamorphosis") or to Thailog (who, we will learn in the episode "Double Jeopardy", has been active for some time).

Fox's original name, Janine Renard, is revealed (though according to "Vows", it is no longer her legal name).

In this episode we learn that Fox is pregnant with Xanatos' child. In "Eye of the Beholder", Xanatos had remarked that he and Fox were "genetically compatible". The child, Alexander Fox Xanatos will eventually be born in "The Gathering Part One".

To fill up the half-hour, a clip from "Awakening: Part Five" was added in to show the destruction of Fortress-1 as Goliath reminisces about it to Elisa.