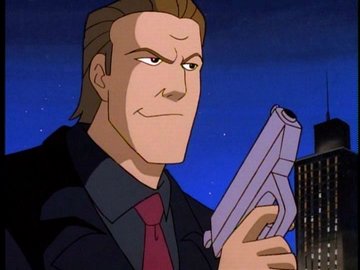 He later planted the bomb that blew up Art and Lois' when Art and Lois refused to pay Dracon protection money. He was brought in for questioning by Bluestone where he was threatened by Elisa, pretending to be a dirty cop, as part of an operation to get her close to Dracon. When Goliath and Broadway joined Elisa in this plan, Dracon ordered Pal Joey to escort the two gargoyles to a dry cleaners that wouldn't pay (Pal Joey was visibly unhappy about this), and he was foiled from blowing it up by Broadway.