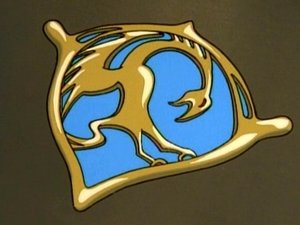 The Phoenix Gate is a magical talisman that allows whoever uses it to travel through time and space.

The origins of the Phoenix Gate are vague, but it is believed that it came into existence with time itself, as a sort of safety valve for the Time Stream. Somehow it took on its present form, that of a small, flat, heater-shaped object with a phoenix design upon it, at some point before the late 10th century.

The Phoenix Gate's earliest recorded appearance is in 975, when Princess Elena's father made it her dowry for her marriage to Prince Malcolm. The Archmage learned of this, and was aware (as Elena and her father presumably were not) of its true nature; desirous of obtaining it so that he could combine it with the Grimorum Arcanorum and the Eye of Odin to become an all-powerful sorcerer, he sent some bandits in his service to seize it from the princess and her escort, the Norman Ambassador. The bandits, however, were foiled by the time-travelling Xanatos, Fox, and Petros Xanatos. Next the Archmage sent Demona, then his apprentice, to steal the Gate from Princess Elena.

Demona did so, but after encountering both her future self and a future Goliath, in the course of which she beheld the immediate aftermath of the Wyvern Massacre nineteen years later, decided not to yield it to her master. Instead, she pretended to him to have lost it, while parting it in half with Goliath. To Goliath, his half of the Gate was only a token of the love that he and Demona had for each other.

Both gargoyles kept their halves of the Gate over the next 1020 years, until Xanatos and Fox's wedding in 1995. Xanatos and Demona then tricked Goliath into coming to the wedding with his half of the Gate, so that Demona could combine it with hers and allow the two schemers to travel back to 975, Xanatos to foil the Archmage's scheme and save Princess Elena, in the process obtaining the rare coin that he would need to found his business empire in 1975, Demona in the effort to persuade her younger self to keep the Gate rather than sharing it with Goliath. Goliath used the Phoenix Gate afterwards to return himself and the other time travellers to 1995, and, aware of its true nature now, kept it at the clock tower with the Grimorum and the Eye of Odin. ("Vows")

Under the Weird Sisters' instructions, Demona and Macbeth stole the three magical objects from the clock tower and delivered them to the Archmage, who used the Phoenix Gate to go back in time and rescue himself from the abyss in 984, then bring his younger self forward in time, helping him set up the steps that he would need to become the "enhanced Archmage". When Goliath finally defeated the Archmage, he took the Gate into his custody, planning to make certain that it would never be used again. ("High Noon"; "Avalon" Part Two; "Avalon" Part Three)

However, he broke that promise when he and his companions came to London on the Avalon World Tour and there encountered Leo and Una. After Leo and Una blamed Goliath for Griff's disappearance in 1940, and kidnapped Elisa, Angela, and Bronx in retaliation, Goliath realized that he would have to use the Gate to go back to 1940 and find out what really happened there. In the process, he met the three London gargoyles, and was finally forced to bring Griff forward in time to 1995, after realizing that he could not change history by bringing the griffon-like gargoyle back to the Mystic shop in 1940. ("M.I.A.")

Later on, near the end of the Avalon World Tour, Puck became aware of Goliath's possession of the Phoenix Gate, and decided to trick him into giving it up so that Puck could bribe Oberon with the Gate into letting him stay in the human world during the Gathering. He did this by placing his "Future Tense" vision upon Goliath, so that the gargoyle believed that he had been transported to a grim and bleak New York in 2036, ruled by Xanatos, with the only way of saving the city from its tyrant being to go back in time and change history. Goliath finally discovered Puck's true plan, however, and to keep the Gate out of his or anyone else's hands, threw it into the Time Stream, hoping that it would be lost in time forever. ("Future Tense")

Goliath was wrong, however. Not long after the gargoyles moved back into Castle Wyvern, the Phoenix Gate will reappear to seek out Brooklyn, and proceed to randomly transport him to a number of different locations in time and space, embarking him on his "Timedancer" adventures. The Gate will appear, transport Brooklyn away to another period of time, and then vanish, to reappear some time later and repeat the process again. Why it singles Brooklyn out for this attention is unknown; however, at last, after forty years from his perspective, it will return him to Castle Wyvern with his new-found family, and then disappear yet again - to reappear at that point in time where it had first originally appeared, to play its part in history all over again in an eternal time loop.

In order to activate the Phoenix Gate, one must hold it and speak the Latin incantation "Deslegrate muri tempi et intervalia!" (This translates roughly to "Burn down walls of space and time!") Afterwards, a ball of fire will appear and teleport the speaker and anyone close enough to him or her to whatever time and place the speaker had envisioned. The one known exception was the "enhanced Archmage," who could control the Gate without even a single spoken word, presumably through sheer will.

Time travellers in the Gargoyles Universe, whether using the Phoenix Gate or any other method (no others have yet been discovered), are unable to change history, for the simple reason that they have already been to the past. Thus, Xanatos' trip to 975, the Archmage's trip to 984, and Goliath's trip to 1940, were all events that could not change the past, but merely served as part of it; Xanatos' visit to Castle Wyvern in the 10th century brought about his receiving the rare coin in 1975 that he had already received twenty years before he left, and similarly Goliath's time travel adventure became responsible for the very disappearance of Griff that he had gone to 1940 to investigate. On the other hand, Goliath was unable to return Griff to the Mystic shop during World War II, and both Demona and Goliath failed to alter the pattern of Demona's behavior from 975 onwards, although they both made the attempt. History is immutable; the very attempts to change it become part of the already-existing pattern - were part of it all along.

The Phoenix Gate was named after the legendary Phoenix, a bird which was said to live in a remote part of Arabia, and which is depicted upon the Gate itself. According to the traditional tale, every 500 years (or 1461, in some versions), the Phoenix would burst into flame, immolating itself, and a new Phoenix would arise from the ashes, to begin the cycle anew. No doubt, the Gate was named after the Phoenix both because of its fiery bursts whenever it was activated, and its eternal time loop paralleling the Phoenix's own endless life cycle of renewal.