Difference between revisions of "Pistol" 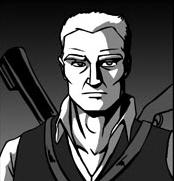 Pistol is a member of Falstaff's gang.

Pistol is named after a character in Shakespeare's play Henry IV Part Two, who reappears in The Merry Wives of Windsor and Henry V. Falstaff's old ensign (standard-bearer), Pistol is a braggart who talks in a comically overblown fashion (many of his speeches are parodies of lines from the plays of Christopher Marlowe, one of Shakespeare's rival dramatists). In Henry V, Pistol marries Mistress Quickly, and enlists in Henry V's army for the French war, as do many of Falstaff's other former followers; he fights in the Battle of Agincourt, successfully capturing a French soldier there, and quarrels with a Welsh officer named Fluellen (who finally gets the better of Pistol, making him eat a leek). The last of Falstaff's associates to survive, he returns to England when the war is over to become a beggar and thief.