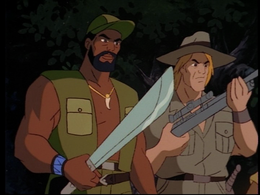 The poachers were two men who joined with Tea to hunt panthers.

Unlike Tea, who was motivated by revenge, these poachers hunted panthers so they could get money selling their teeth, claws, and fur. Tea and the poachers interrupted the ceremony for the Panther Queen being conducted by Fara Maku and Diane Maza. When Fara Maku became agitated and transformed into a werepanther, Tea pursued him, leaving the poachers to deal with Diane and Elisa. However, they were saved by Goliath, Angela, and Bronx. The poachers were locked in the ceremonial panther's cage. What happened to them later is unknown. [1]