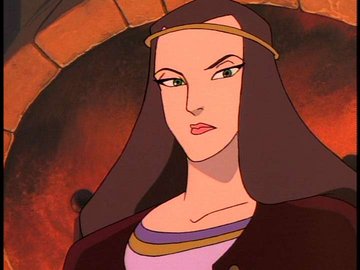 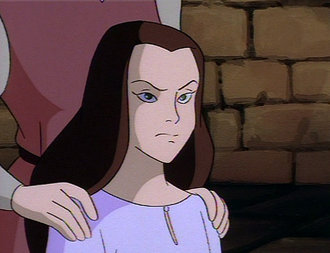 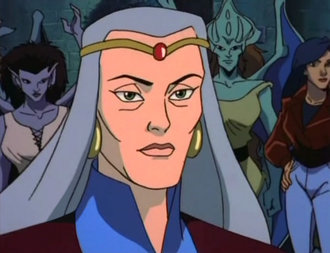 Katharine was taken prisoner, as were her human subjects; the Captain and Hakon planned to hold her for ransom. But when Goliath and the other surviving gargoyles attacked the Vikings' camp, Hakon angrily attempted to kill her; in the ensuing confrontation, the Captain, Hakon, and Katharine all fell off the top of a cliff, but Goliath saved Katharine's life in time. Katharine, startled by this event, thanked Goliath, and began to understand the error of her ways at last. When she discovered that the Magus had irrevocably put the other gargoyles under a sleep spell (locking them in stone until the Castle rose above the clouds), Katharine made what amends she could by promising to take care of the eggs in the rookery. ("Awakening Part One", "Awakening" Part Two)

In 1995, the Archmage and the Weird Sisters attacked Avalon, and Katharine took part in the defense of her home with the rest of the clan, even laying Demona low with her own laser cannon. ("Avalon" Parts One, Two, Three) The following year, Katharine also took part in the defense of the Avalon Clan from the returned Oberon. ("Ill Met By Moonlight") She and Oberon are now on reasonably peaceful terms. ("The Gathering" Part One)

Greg Weisman originally thought Michael Reaves' spelling of Katharine's name (with two a's) was unusual but figured that just made it special. As it would turn out, the original spelling was likely just a typo (Michael has no specific memory about it), but Greg has chosen to keep it, as that is how the first episode credits the Princess' name.[1]