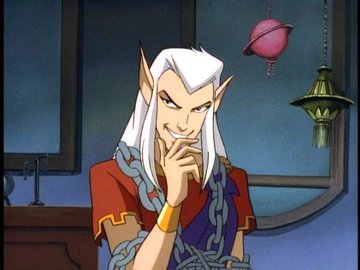 Puck is a Child of Oberon and a trickster.

A personal servant to Oberon, Puck was banished to the human world in 995 along with the rest of the Third Race. His adventures there are unknown until some point in the late 20th century, when he observed Titania's disguise of Anastasia Renard, and became intrigued by it. Deciding that he would like to play a part in human affairs, disguised as a human, himself, he took on the identity of Owen Burnett, modelling him in appearance and character after Preston Vogel. ("The Gathering Part Two") Puck's career as Owen can be found, for the most part, under Owen's entry.

In 1995, Demona used Titania's Mirror to summon Puck, and ordered him to get rid of all the humans in New York City. Puck, disliking the prospect of actually killing the humans, instead changed them all into gargoyles, so that he could truthfully tell Demona that there were no humans left in the city. He also turned the Manhattan Clan gargoyles into humans, when Demona didn't make her intentions clear. Goliath and his clan finally captured Puck and made him undo his spell. Amused with the merry confusion that had taken place that night, Puck decided to express his gratitude to Demona by placing a spell upon her so that she would never turn to stone in the daytime again. However, the catch was that she would turn to a human during the daytime instead with a painful transformation. ("The Mirror")

When the time of the Gathering approached, Puck was panic-stricken at the prospect of having to return to Avalon and stay there. In the hopes of bribing Oberon to let him live among the mortals for a while longer, he decided to trick Goliath into giving him up the Phoenix Gate by inflicting his "Future Tense" vision upon him. Goliath discovered, almost at the last moment, Puck's true purpose, and the trickster was forced to give up his attempt and leave.

Puck did get his wish in the end, however, but not in the manner that he had expected. After Goliath persuaded Oberon and Titania to let Alex remain in the outside world, Oberon appointed Puck Alex’s tutor at the gargoyle's suggestion, but decreed him banished forever from Avalon, and also trapped him in the form of Owen Burnett, only able to become Puck when protecting or teaching Alexander. And Puck has been trapped as Owen ever since, except for tutoring Alex. He has, however, already had one occasion to resume his original self, when he gave his young charge a lesson in soul transference that led to the housing of Desdemona and Iago's souls in Coldfire and Coldsteel's bodies. ("The Gathering Part Two", "Possession") At some point in the future, Puck (along with Lexington and the Family Xanatos) will be involved in rescuing Alex when Raven kidnaps him. [2][3]

In addition, at some point in time Puck may have encountered a TimeDancing Brooklyn. [4]

Puck is a trickster, and one of the more light-hearted of his kind, who delights in all manner of relatively harmless magical confusion, such as changing humans into gargoyles and medieval weaponry into overgrown sunflowers. Despite his capacity for causing trouble, he does have a certain fondness for humans - and a mild dislike for humorless people, or at least for working with them, such as Demona. He has also developed a loyalty to the Xanatoses, initially based simply on fascination with and delight in their own "trickster" natures and ingenuity, but which has deepened to a level that has astonished him.

Puck has also gone under the alias of Robin Goodfellow, which is publicly connected to him in the way that "Owen Burnett" is not. [5] He, at some point in his career, crafted a magic flute, which Oberon used to help Boudicca find his scent when tracking Puck in New York at the time of the Gathering (the powers of this flute are as yet unknown). While considerably powerful in magic, Puck occasionally needs a conduit to amplify his antics, such as when he used the antenna mounted on the North Tower of the World Trade Center to transform all the humans on Manhattan Island into gargoyles (and later back to humans). Though Titania's Mirror has been used to summon Puck, he is not particularly bound to it -- depending on the spell's potency, Puck could be summoned through any magic mirror. [6][7]

Puck originated in English folklore as a rather sinister figure, almost equivalent to a demon, but by the time of Shakespeare's A Midsummer Night's Dream (and maybe even through it) developed into more of a mild trickster figure, fond of practical jokes. In the play, he serves Oberon as a sort of court jester, and carries out errands for him; in particular, he fetches the magical herb "Love-in-Idleness" for the faerie king and uses it to make Titania fall in love with Bottom (whom he has, independently, given a donkey's head), and also upon Lysander and Demetrius to straighten out their romances with Hermia and Helena - although not without some initial confusion due to his having (he claims) confused the two Athenian men with each other.

Rudyard Kipling later on also used Puck as a leading figure in his two children's books, Puck of Pook Hill and Rewards and Fairies, where he encounters two English children, named Dan and Una, and introduces them to various figures in the past history of the island, including a Norman knight who fought at the Battle of Hastings, a Roman centurion posted at Hadrian's Wall against the Picts in the late 4th century A.D., a smuggler who had met both George Washington and Napoleon, and even Elizabeth I, incognito, herself.

Puck is sometimes called Robin Goodfellow (a name which the Gargoyles writers considered using for the character). However, Robin Goodfellow was originally in English folklore a distinct figure from Puck, portrayed as a sort of brownie or hobgoblin, a being who attaches himself to a household and helps look after it, tidying up the house at night and performing other useful chores. (This is a particularly interesting role for the figure, in light of Owen's own function in Xanatos' household, as almost a mundanized version of the brownie - although this seems to be a coincidence, for Greg Weisman was unaware of this role of Robin Goodfellow's at the time that he was working on the series). One account of him, a 17th century pamphlet, actually portrays him as the son of Oberon by a human woman (although this is not Puck's actual origin in the Gargoyles Universe). It was William Shakespeare who equated Robin Goodfellow with Puck in his A Midsummer Night's Dream.