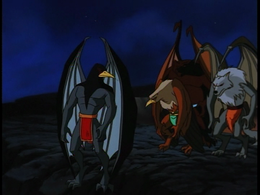 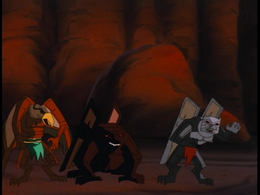 Raven’s clan were illusions created and later totems animated by Raven based on the totem poles on Queen Florence Island.

In addition to giving himself a gargoyle-like appearance, to win Goliath’s trust, Raven also created illusions that looked like gargoyles. They appeared to be based on an eagle, a bear and a wolf. Raven’s illusions did not speak. The reason Raven gave for this was that they were crippled with grief due to most of their clan being destroyed. When Goliath left his sight, Raven caused the illusions to vanish.

Later, when Natsilane came to battle Raven, the latter used his magic to bring back his clan, but this time with a blocky wood appearance to battle Goliath, Angela, and Bronx. All the totem warriors were smashed.