Difference between revisions of "Resistance Skimmer" 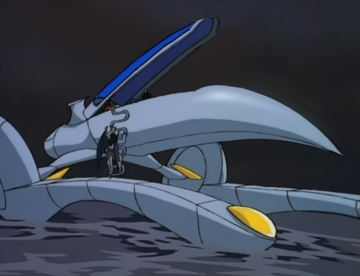 Goliath climbs aboard the futuristic skimmer.

In Puck's "Future Tense" illusion, the Resistance skimmer was used by Matt Bluestone and Claw to save Goliath and Bronx not long after Elisa and Angela were taken away by the Steel Clan.

Shortly after the World Travelers returned to Manhattan, the skiff was swiftly destroyed when the Steel Clan was sent by The Xanatos Program to capture them. Once inside the craft, Matt told Goliath that he had been gone for forty years after Goliath failed to recognize Matt in his old age.

The skimmer had a design of two arched pontoons as well as a rocket for thrust.