Difference between revisions of "Robyn Canmore" 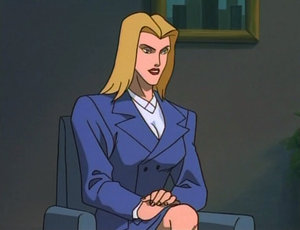 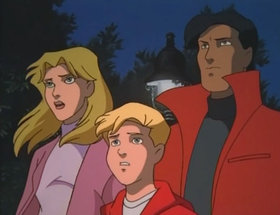 Robyn was born on June 19th, 1966. In 1980, when she was 14, she accompanied her brothers and her father, Charles Canmore, to Paris, where, on the night of September 28th, she saw her father's fatal battle with Demona at Notre Dame Cathedral. She pursued The Demon into the Catacombs with her brothers and was assaulted by the gargoyle. Fortunately, Jason saved her and Demona fled. Afterwards, she and her brothers became Hunters, vowing to hunt down and destroy Demona and any other surviving gargoyles.

The numerous gargoyle sightings in Manhattan brought the Canmores to New York in 1996. There, Robyn applied for a position at Nightstone Unlimited as Dominique Destine's personal assistant, under the alias of Robyn Correy. There, she discovered Dominique's double identity as Demona, and learned about her genocide scheme, "Operation Clean Slate".

Robyn also took part in the struggle between the Hunters and Goliath's Clan, personally destroying the clock tower herself. However, after the battle at the dam where Jason Canmore was seemingly killed, she began to have doubts about their war upon all gargoyles, particularly after seeing what it was doing to Jon's character. She went with him to St. Damien's Cathedral for their final battle with the clan, but stopped the fighting when Jason and Elisa arrived, as Jon did not. Her original feelings about gargoyles were further shaken when she saw Goliath destroy the Praying Gargoyle, willingly risking his life and those of his entire race to save humanity from destruction. ("Hunter's Moon") Afterwards, Robyn Canmore was taken into temporary police custody for destroying the clock tower. 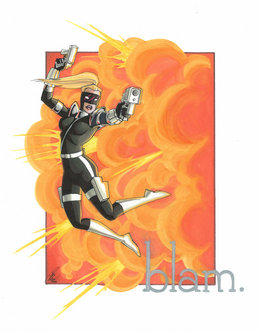 On New Years Eve, 1996, Hunter and her squad arrived in Manhattan on a mission to track down Dr. Sevarius. While there, she visited Jason at Rikers Island and together they spotted John Castaway in a television commercial for the Quarrymen. Recognizing him as Jon, Hunter approached him at the Quarryman Brownstone in an attempt to reason with him, only to be dismissed. Afterwards, while searching for Dingo and Matrix in the sewers below the city, she was attacked by Fang. ("Estranged") Though Yama managed to save her, they were both taken captive and brought to Sevarius' lab. There the scientist intended to inject Hunter with a mutagenic formula made using Angela's DNA, turning her into a human-gargoyle mutate. She escaped this fate thanks to Dingo and Matrix, and then led the Redemption Squad to Times Square, where they successfully stopped Fang from releasing the CV-1997 Carrier Virus upon the thousands of people gathered there. Though their actions had saved many people from being mutated, Hunter was upset to learn that Tasha, one of Sevarius' early test subjects, had committed suicide, and that the doctor had escaped. Hunter protested when the Director subsequently assigned Fang to the Squad, but was overruled. ("Louse")

A few days later, Hunter led the group to an isolated island where they were attacked by massive robots.

Robyn, as Hunter, will continue to lead the Squad on many dangerous missions. She will eventually develop a stormy relationship with Dingo in the course of this new career, and they will presumably eventually be married. By 2198, their family, the Monmouths, will still be extant, and be at odds with the Castaways, descended from John Castaway.