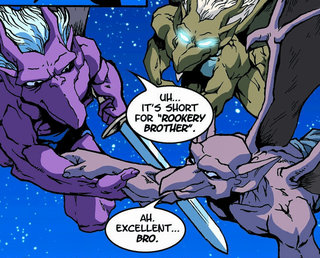 By 1020, Schnozz was one of just six remaining gargoyles in the Lunfanan Cell. Under Demona's leadership, his clan raided human food stores and farms to survive. In 1040, he survived an attack on the clan in their cave roost by Duncan and his men. The clan was forced to move to a new lair and a new territory. ("City of Stone Part One", "City of Stone Part Three")

Unfortunately, only seventeen years later, in 1057, the clan was at war with humans again, this time with Canmore and his English allies. Schnozz continued to fight alongside his clan. Sadly, Demona betrayed Macbeth to Canmore, giving Canmore the opportunity to betray her. Canmore and his men destroyed Schnozz and the rest of the clan, leaving Demona alone once more. ("City of Stone Part Four")