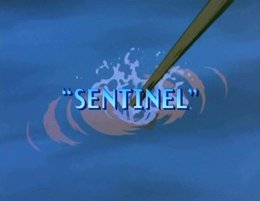 "Sentinel" is the fifty-second televised episode of the series Gargoyles, and the thirty-ninth episode of Season 2.

In a particularly noteworthy animation nit, Elisa's black t-shirt is shown to be long-sleeved while she's taking the tour of Nokkar's spaceship. However, in the immediately preceding episode, The Green, she was wearing a short-sleeved shirt instead.