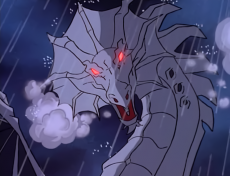 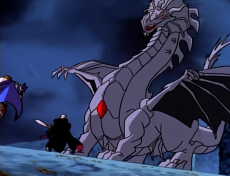 The Stone Dragon was a large, magically-animated statue of a dragon in the center of the hedge maze at Brooklyn Botanical Gardens, from which King Arthur recovered the sword Excalibur.

The statue subsumed the role that the Stone of Destiny had fulfilled when Arthur was younger, becoming the stone from which Arthur drew the sword.

Designed with the specific function to test the one true king, it is unclear who or what created the magical statue. [1]

The Stone Dragon originally appeared as a statue of a large European dragon at rest, with its wings caped about its shoulders. A sword was slid partway into the stone so that it seemed like the claws on the dragon's wings were gripping the sword over its chest.

While searching for the sword Excalibur, King Arthur and Griff were directed to the statue by the Lady of the Lake, and guided to the spot by Hudson and the Trio. Before Arthur could reach the sword, Macbeth arrived and withdrew the sword from the dragon's chest.

Upon the sword being removed, the dragon woke up - it opened its eyes, which glowed red, and spread its wings revealing a red stone on its chest. The magically-animated dragon was able to fly and also breathe fire. It had three holes resembling steam vents on either side of its neck. It began attacking Macbeth, Pendragon and Griff.

While fighting the dragon, Arthur came to realise that the sword Macbeth had drawn was not the real Excalibur and he shattered it on the dragon's stone body. Recalling a line from the Excalibur Poem recited earlier by Griff, Arthur realized that Excalibur was actually within the stone dragon, and successfully released it by smashing the red stone on the dragon's chest. The dragon then began to crack and fall apart, and finally disappeared in a flash of light. ("Pendragon")

It is currently unclear how Excalibur and the Stone Dragon came to be located in New York City. [2]