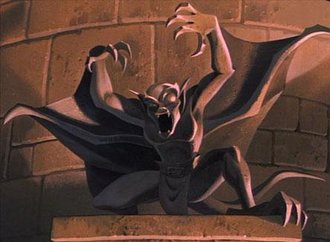 Stone sleep is not activated by sunlight coming into contact with gargoyles, even though it appears to be that way. Even if a gargoyle is kept in a completely dark room during the daytime, cut off entirely from the sun, he or she will still become stone - although the transformation may be delayed slightly. Instead, stone sleep is triggered by gargoyles' internal biological clocks, which are strongly tied into the Earth's bio-rhythms.

Actually, gargoyles do not turn into stone outright during this time, but rather, an organic substance similar to stone. While the exact mechanism and cause of this are currently unknown and only hypothesized about, it is known that it is a natural feature of gargoyles rather than the result of some magical intervention. (Of course, it is doubtful that superstitious humans would see it in that light.)

Stone sleep lasts from dawn to sunset, except in some odd cases as when gargoyles are being rapidly transported to different parts of the planet, causing their biological clocks to be somewhat off in a variant of jet lag. For instance, when Lexington and Hudson were transported from New York to London during the day, they were now about five hours ahead of their clanmates in Manhattan and their biological clocks had to change as well. Even after only one days sleep, their bodies had already started to adjust and so they ended up waking about three hours earlier than they would've in New York. This was not only disorientating for a gargoyle, but they also felt somewhat sick. After several days, they had completely adjusted. This gargoyle form of "jetlag" seems to be caused by the highly attuned nature of stone sleep to the Earth's bio-rhythms. [1] Goliath, Angela and Bronx seem to have experienced it occasionally during the Avalon World Tour, though the magic of Avalon seems to have compensated at times.

During their time asleep, gargoyles heal from their wounds, purify their bodies of toxins and recover from any illnesses that they might have; in most cases, they will awaken from stone sleep fully cured. There are occasional exceptions to this rule if the damage inflicted upon a gargoyle is severe enough, as in the case of Hudson's being blinded in one eye by the Archmage. Also, if a wound is severe, the gargoyle may awaken healed but still weak or tired. Severed limbs will not grow back. Likewise, a gargoyle maimed in stone sleep - say, by having an arm chiseled off - will remain maimed upon awakening - and probably will not survive long, due to the severity of the wound. Extreme damage done during stone sleep may result in the death of the gargoyle, in which case they wouldn't wake up at all. During their sleep, gargoyles also dream.

Anton Sevarius has theorized that stone sleep also provides gargoyles with the energy to glide about at night. In their stone form, they absorb and trap thermal energy, giving them enough strength to glide. Without this useful feature, a gargoyle would have to eat the equivalent of three cows a night in order to become strong enough to be able to get airborne. However, gargoyles glide on air currents, rather than flying under their own power, suggesting that Sevarius is overestimating the species energy needs. Furthermore, there have been instances of Gargoyles entering and waking from their stone sleep in enclosed and darkened areas and apparently not suffering from any lethargy, so perhaps this hypothesis is flawed.

Gargoyles' clothing turns to stone with them. Originally, this was not the case; their garments (if any were worn) would remain unchanged, and consequently, would get torn apart when the gargoyle awakened. This came to an end during the reign of Caesar Augustus (27 B.C. - A.D. 14), who, displeased with seeing gargoyles rendered naked upon their awakening this way, had his adviser, the Roman Magus, cast a "Spell of Humility" over the entire race that caused their garments to become affected by stone sleep. This spell also causes any possession that the gargoyle is holding at the time and considers to be his or her own to turn to stone during the day, likewise.

When a gargoyle awakens at night, he or she turns to flesh and blood from the inside out, finally shattering a thin layer of stone over himself or herself. These stone fragments usually quickly decompose, although occasionally one will last for quite a while (such as the piece of stone skin that Jon Canmore found during his visit to Castle Wyvern.) They have some unusual properties of their own; for example, a vital ingredient of the brew of the Cauldron of Life is a piece of stone skin. It has also been hypothesized that these stone fragments serve as a means for gargoyles to expel waste products, although this is also uncertain; gargoyles' "bathroom habits" have generally not been studied, out of the feeling that it's best to leave them some dignity and privacy.

On rare occasions, a gargoyle may be able to avoid stone sleep through magical intervention. The four pendants powered by the Mayan Sun Amulet allow the gargoyles who wear them to remain awake during the daytime; the Eye of Odin had a similar effect upon Goliath when he wore it. Demona has also become able to avoid stone sleep thanks to a magical gift of Puck's, which turns her into a human in the daytime. In all these cases, the gargoyle in question still ages at their usual rate and is still able to glide at night, in spite of the loss of stone sleep, because the magic that has removed this need from them also compensates for this loss. The Coldtrio are also no longer subject to stone sleep, because of their mechanical or cybernetic bodies and, in Coldstone's case, his non-living flesh.

While stone sleep is in many ways a boon to gargoyles, it also forms their Achilles' heel. As Greg Weisman explains, "Stone sleep is a huge protection against predators in the pre-tool age. Claws and teeth don't bite through stone (or rather the organic stone-like substance that gargoyles turn into). Even scent is altered. A stone gargoyle is of little interest to and in almost no danger from other animals. It's not until humans developed tools -- thousands of years after gargoyles evolved -- that stone sleep became a liability." In their stone state, they are defenseless, unable to fight or flee in their own defense. Human enemies could easily smash a stone gargoyle to rubble - and have often done this, particularly in the cases of the massacres of Wyvern Clan, the Sruighlea Cell, and the Mayan Clan. And a gargoyle shattered in stone sleep is dead forever (except through magical intervention of the sort that created Coldstone), and will remain stone even after sunset.