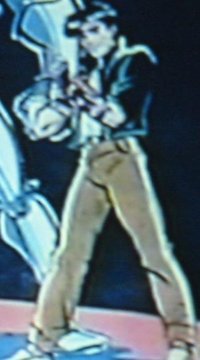 Terry Chung - A young man who helped bring the New Olympians into contact with the outside world.

After graduating from MIT, Terry rashly decided to sail around the world on its own, and ran into a storm near New Olympus. He almost perished in it, but was rescued by Sphinx, who brought him to New Olympus. There, Terry was placed on "trial" by the New Olympians, much as Elisa was; the New Olympians’ final decision was to make contact with humanity and establish diplomatic relations to them. Terry accompanied the delegation of Taurus, Talos, and Sphinx to the United Nations Building in New York, after which his mother became the United Nations ambassador to New Olympus. Terry and Sphinx have entered into a Romeo-and-Juliet-style relationship, much to the alarm, disgust, and opposition of their fellow humans and New Olympians alike.