Difference between revisions of "The Flashback of Notre Dame" 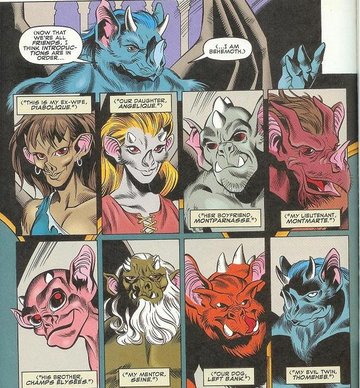 "The Flashback of Notre Dame" was an 11-page Gargoyles parody story that appeared in JLA Showcase 80-Page Giant #1, published in February 2000 by DC Comics. Set during the days of Justice League Europe (whose self-titled series had been cancelled seven years previously), "The Flashback of Notre Dame" was written by Greg Weisman and prominently featured the superhero Captain Atom. Greg Weisman had been, with Cary Bates, a writer on Captain Atom's solo series from 1987 until 1991. [1][2][3]

An unnamed gargoyle claims to hate pigeons while being chased by the Blue Jay. In the early comedy development, Georgette/Dakota (who later became Demona) was phobic of pigeons. [4][5] In the Series Bible, Bronx is described as "uncontrollable around pigeons". They drive him nuts.

The gargoyles are eventually returned to the "mystic island of Brigadoon", a reference to Avalon. Brigadoon was briefly considered for use in the actual series in Avalon's place, although when it became clear that Brigadoon had been created for the Lerner and Loewe musical (also called Brigadoon), this idea was dropped and Avalon was used instead. [6][7]

The original title of this story was "A Case of Self Indulgence" and, as a visual pun, artist Christopher Jones placed the title on the side of a crate that Kilowog is seen carrying in the opening frame. When Dan Raspler, the editor, changed the title to its current form, the joke became lost, although Greg Weisman has said that the new title is much more clever. [8][9]

The story was intended to be set in the year 1991, although the two references to this were removed by the editor. [10] Nevertheless, the date is identified as February 28th, and Behemoth also mentions that it is "the last full moon in February". There was indeed a full moon on February 28, 1991. [11][12]

Pat Broderick, the pencil artist who had worked with Greg Weisman and Cary Bates on the original Captain Atom title, was originally supposed to work on "Flashback" as a sort of reunion. However, in the end, Christopher Jones worked on the story instead (Jones would later work with Weisman on both the Gargoyles: Bad Guys and Young Justice comics). [13]

In the first draft of the story, it opened with the funeral-at-sea of Heinrich Megala, a scientist attached to Project Atom who had appeared in the original run of the Captain Atom title. Dan Raspler, the editor, felt that this scene was too serious and too far removed from the tone of the rest of the story, and Greg Weisman agreed to change it. [14]

An early draft of the story had not included the Flash as a character, and Greg Weisman's editor asked him to do a rewrite so that the JLE's membership did not appear to be so feeble. [15]

Greg Weisman claims that his favorite word in the entire story is "Thomeheb". [16]