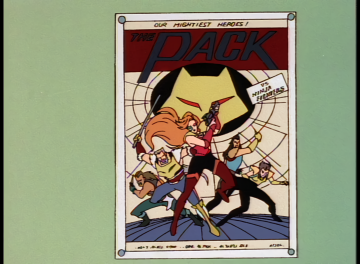 The Pack was a syndicated television series formed around the Pack, depicting them as action heroes constantly doing battle with Evil Ninjas and racing about corridors. [1] The series appeared to be strictly action with almost no characterization or plot, and we can also safely assume that after Fox and Wolf were arrested following their initial clash with the gargoyles, the program was hurriedly canceled.

The show was produced by PackMedia Studios and was enjoyed by the Trio and Hudson until their first encounter with the Pack. The series had completed at least one full season (and just begun airing another) before it was pulled. [2] Billy and Susan Greene remained fans of the show long after its cancellation. ("The Thrill of the Hunt", "Masque")

When trying to explain law and order to Matrix, Dingo brings up how Fox and himself use to be heroes to many as stars of The Pack. ("Walkabout")

Xanatos probably worked on conceiving the series, but delegated the day to day work on it to others. [3]