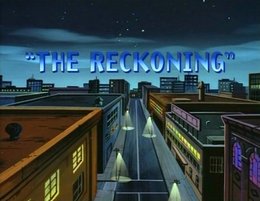 "The Reckoning" is the sixty-first televised episode of the series Gargoyles, and the forty-eighth episode of Season 2. It originally aired on May 7, 1996.

Although Thailog is not heard from again in the remainder of this season, he did survive the roller-coaster fire. He next appears at the end of "Invitation Only" as an unwelcome guest at the Labyrinth, out to reclaim the Clones (though only Brentwood freely leaves with him, in the end).

Fang next appears in the first issue of Gargoyles: Bad Guys, "Strangers", as a member of the Redemption Squad working for Robyn Canmore. The beginning of his escape from the Labyrinth (he was broken out by Sevarius) was shown at the end of the second issue, "The Lost".

"The Reckoning" was originally intended as being a two-part season finale, but was later on shrunk down to a one-parter after "Hunter's Moon" became the season finale. This is probably the reason for Goliath's "new beginning" line and Demona and Goliath's discussion about clans ending with Demona mirroring Goliath's line from "Reawakening", the first season finale, "You don't know the meaning of the word," and adding in "but I'll teach you." to make more fitting to the following development.