From GargWiki
Revision as of 04:52, 28 July 2010 by Matt (talk | contribs) (Grammar and adding links.)
(diff) ← Older revision | Latest revision (diff) | Newer revision → (diff)
Jump to: navigation, search
This page is part of a series of articles on 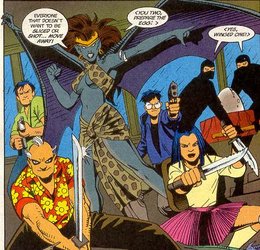 The Triad is a Chinese crime syndicate.

For several centuries, they've had in their possession a gargoyle egg. In the 1990s, they allied with Demona after she turned to stone on the yacht belonging to one of their leading members, Gong Li. After taking command of the Triad, Demona attempted to use a bolt of lightning to hatch the gargoyle egg on top of the Empire State Building. Yes, it is as asinine as it sounds. One can only assume that this wasn't actually a gargoyle egg and Demona was lying to Goliath.

Their scheme was foiled by the Manhattan Clan and most of the members of the Triad were arrested. Gong Li fled with the egg.