Difference between revisions of "Vendettas" 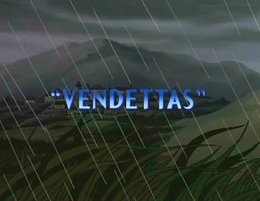 "Vendettas" is the fifty-ninth televised episode of the series Gargoyles, and the forty-sixth episode of Season 2. It originally aired on May 1, 1996.

Goliath and Hudson are on patrol when they are attacked by Wolf wielding a battle axe containing Hakon's ghost. Wolf battles with the two gargoyles on a pier until Wolf is knocked out, and Hakon leaves the axe to take over his body. The ghost possessed mutate fares better against the gargoyles, even forcing Hudson to attack Goliath as their battle continues in a warehouse. Wolf forces Hakon out of his body, however, and they follow the gargoyles to a junkyard, where Wolf fights with Goliath, and Hakon with Hudson. Wolf is defeated when a pile of cars topple onto him, while Hakon's axe is crushed in an incinerator, causing the ghost to leave the Earth-plane. Goliath and Hudson are glad the night is over, when Vinnie suddenly shows up swearing revenge, and hits Goliath in the face with a banana cream pie.

Vinnie purchases a pie-throwing gun which he dubs "Mr. Carter", and proceedes to get revenge on the gargoyles while explaining to his gun how the gargoyles have ruined his life. He refers to several instances from former episodes when he ran into misfortune by accidently clashing with the gargoyles. He lost his driver's license when Lexington accidently crashed his motorocyle in "Awakening Part Three". He lost two security jobs when Goliath and Demona destroyed Fortress-1 in "Awakening Part Five", and when Goliath kidnapped Sevarius in "The Cage". He pursues Goliath and Hudson as they fight Wolf and Hakon, seemingly oblivious to their plight, and getting into unfortunate situations until he finally reaches up to them.

"Hey, you got a problem with that?" - Mr. Acme and Vinnie

"I'm glad someone did." - Hudson and Goliath

"The question isn't when, but how?" - Hudson and Goliath

"I haven't the slightest idea." - Hudson and Goliath

Hakon appears for the first time since "Shadows of the Past".

This episode takes place at approximately the same time as the following episode "Turf".

Vinnie mentions the events of this episode (specifically his attack of Goliath with a cream pie) in "Nightwatch" and "The Journey".

Wolf was presumably arrested shortly after the events of this episode, since in "Phoenix", Elisa reports that Jackal had broken him out of prison.

This is the only episode which ends with an iris-out (another sign that it was designed as primarily a comedy).

Brendan, Margot, and the Jogger are among the passersby who stare at Vinnie as he lugs Mr. Carter along.

Greg Weisman realized too late, after making this episode, that the weapon that Hakon was joined to should have been the mace that he used in the Wyvern Massacre rather than a battle-axe.

Vinnie's name, and Mr. Carter's, were both references to the television series Welcome back Kotter (1975-79): the characters of Mr. Kotter and Vinnie Barbarino.

Mr. Acme's name was a reference to the Warner Brothers classic Roadrunner-and-Coyote cartoons, derived from the numerous Acme products that Wile E. Coyote used in his unsuccessful attempts to catch the Roadrunner. (Obviously the Coyote robots aren't the only Wile E. analogue in the Gargoyles Universe; Vinnie's own self-caused humiliations parallel Wile E. Coyote's perfectly.)

Vinnie hums the Gargoyles theme music as he walks off after finally pieing Goliath (with no explanation as to how he became aware of it).

A close-up of Vinnie pulling Mr. Carter's trigger just before the water tower spills on him has been cut. Due to Vinnie's voiceover during that shot, the previous shot of Goliath in Mr. Carter's cross-hairs is slowed down to make up the time.