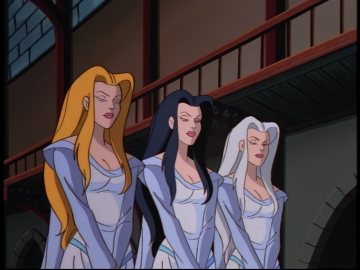 The Weird Sisters' most preferred guise. Left to right; Phoebe, Seline, and Luna. 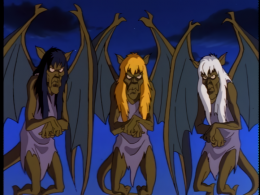 The Weird Sisters as three gargoyles. 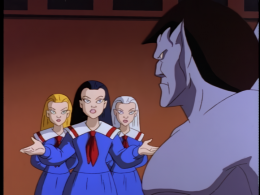 The Weird Sisters as three children. 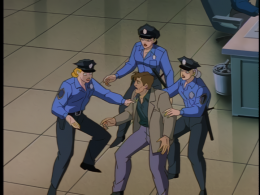 The Weird Sisters as cops.

The Weird Sisters are three powerful Children of Oberon, who are always found together. Their individual names are Luna, Phoebe, and Seline, but they nearly always act as a group.

During the overthrow of Queen Mab, the Weird Sisters sided with Oberon. [1] Centuries later, when Oberon expelled his Children from Avalon in 995, he had the Weird Sisters remain behind on a barge just off the shore of Avalon, to prevent anyone from entering the island in his absence. When Princess Katharine and her companions fled to Avalon later that year, the Sisters denied them entry and even tried to turn them into owls; the Magus responded by turning their spell back upon them, transforming them into owls themselves. Katharine, the Magus, Tom, and the eggs were thus free to enter Avalon unopposed. ("Avalon" Part One)

The "enhanced Archmage" appeared at that point to turn the Weird Sisters back and offered to help them wrest Avalon back from the human intruders and gain their revenge upon them. Since the Sisters were unable to return to Avalon on their own before Oberon's decree of banishment was lifted, they agreed to the alliance with him. In 1020, the Archmage met with them, and told them to watch over Macbeth and Demona, to make them into his future servants. ("Avalon" Part Two)

The Sisters could not directly affect the lives of Macbeth and Demona, because of Oberon's Law, so they acted more subtly. In 1020 and 1032, they twice manipulated Macbeth and Demona into fighting side by side against Gillecomgain the Hunter, luring Demona to Castle Moray in the guise of three elderly gargoyles. In 1040, they appeared to Macbeth and Duncan on a lonely heath, and before them foretold that Macbeth and Luach would someday become King of Scotland. As they had hoped, Duncan promptly decided to move against Macbeth to prevent the prophecy from being fulfilled. The Sisters then persuaded Macbeth and Demona to ally against their common foe, and obtained their permission to magically bind them together, in the guise of rejuvenating Demona by transferring Macbeth's youth to her; in the process, they made them both immortal, only able to die if one slew the other. ("City of Stone" Part Two, "City of Stone" Part Three)

After the fall of Macbeth's kingdom to Canmore in 1057 and the beginning of the long years of wandering for both he and Demona, the Weird Sisters watched over the two through the centuries, even intervening twice in Demona and Macbeth's lives, under circumstances as yet unknown. [2] At last, in 1995, they stepped in to prevent the two of them from killing each other at the Eyrie Building (providing them with a tiny loophole to Oberon's Law), and also persuaded Demona to give Xanatos the access code that he needed to regain control of his computer and thus break her "stone by night" curse upon New York. [3] Afterwards, the Sisters used Demona and Macbeth, now placed under a spell of mental control by them, to steal the Grimorum Arcanorum, Eye of Odin, and Phoenix Gate from the clock tower, for them to turn over to the Archmage. (They also, for reasons as yet unknown, used Desdemona's soul to persuade Othello to regain control of Coldstone during Demona and Elisa's battle at Belvedere Castle). ("City of Stone" Part Four, "High Noon")

The Weird Sisters fought for the Archmage in the battle on Avalon, attacking the Magus in particular in the hopes of gaining revenge. He finally defeated them by binding them with iron chains made from the two suits of armor that had guarded King Arthur's sleeping place, although at the cost of his own life. Afterwards, Goliath made them release Demona and Macbeth from their spell of mind control, and then released them. ("Avalon" Part Three)

The Sisters sought out Oberon and Titania afterwards, and reported to them how the Avalon Clan was "trespassing" on the magical island, giving a rather distorted account of events that (presumably) omitted the Archmage and his attempted war of conquest. As they had hoped, Oberon returned with the intent of expelling the "mortal intruders," but was finally persuaded to let them remain in Avalon instead, even making the gargoyles his honor guard. The Sisters were foiled again in their quest for revenge, but apparently have not given up hope as yet of achieving it, even if they have to move much more cautiously now that the Avalon Clan is under Oberon's protection. ("Ill Met By Moonlight")

More recently, the Weird Sisters were sent into the outside world, by Oberon's orders, to forcibly bring the Banshee back to Avalon for the Gathering. ("The Gathering" Part One)

The Weird Sisters will continue their tri-part mission, and still have plans for Demona and Macbeth. [4][5] They still also want revenge on Goliath and the Avalon Clan (but will need to be careful as they go about it, so as not to risk upsetting Oberon or Titania). [6] Though fate and vengeance have been ascendant thus far, grace is also important and will eventually be revealed. [7]

The Weird Sisters can assume various forms, although no matter what shape they are in, their coloring remains the same; Luna is silver-haired (and is the Sister of Fate), Phoebe is golden-haired (and is the Sister of Grace), and Seline black-haired (and is the Sister of Vengeance or Fury). The Weird Sisters are completely unaware that they are consistently battling the other two sisters for ascendancy. [8] They can appear various ages, sometimes hags (whether human or gargoyle), and sometimes small girls, but their "regular form" is that of three tall, stately, and beautiful young women in flowing gowns. As triplets, one sister is older than the others and another the youngest, but they aren't always 'aged' in the same order. [9] They appear to have some connection with fate, in the same manner that Anubis has some connection with death.

Macbeth and Banquo meeting the Weird Sisters, by Théodore Chassériau.

On the immediate level, the Weird Sisters are Gargoyles's adaptation of the Three Witches from Shakespeare's Macbeth, who foretold his becoming King of Scotland and later on delivered to him the misleading prophecies that he could not be slain by anyone born of woman (leaving out the fact that someone born by Caesarian section, such as Macduff, could perform the deed) and that he could not be overthrown until Birnam Wood came to Dunsinane (again, saying nothing about Malcolm's achievement of this through bearing branches from Birnam Wood as camouflage). These three figures first appear in Holinshed's Chronicles, where they are identified as the goddesses of destiny or Fates, an interpretation that Gargoyles followed in its use of the Weird Sisters.

Shakespeare, on the other hand, seems to have interpreted them as being human witches, although indeed naming them the "Weird Sisters;" it is possible that "weird" here is derived from the Anglo-Saxon word wyrd, which means "fate" or "destiny."

Moving beyond Shakespeare, however, the Weird Sisters are also echoes of various triads of goddesses in mythology. Four triads stand out in particular for their originals: the Fates, Furies, and Graces in Greek mythology, and the Norns in Norse mythology. [10]

As "goddesses of destiny," the Weird Sisters serve as the counterparts in Gargoyles to both the Fates and the Norns. The Fates or Moirai were three sisters who determined the fates of humans: Clotho spun their threads of life upon her spindle, Lachesis measured how long each human's life was to be, and Atropos cut the thread with her shears when it was time for that human to die. Even Zeus could not avert their pronouncements.

The Norns were also three sisters, Urd, Verdandi, and Skuld, who spun the lives of mortals; they lived by the World Ash-Tree Yggdrasil, and daily sprinkled it with water from an enchanted spring nearby, healing it of the damage done it by the deer and serpents who constantly gnawed at it.

The Weird Sisters' vengeful nature makes them an echo of the Furies or Erinyes. These were three underworld goddesses, Alecto, Tisiphone, and Megara, fearsome beings who would pursue and torment notorious criminals mercilessly. Their most celebrated victim was Orestes, whom they hounded for the murder of his mother Clytemnestra, until Athena and Apollo intervened to purify him.

The three Graces or Charites were goddesses of beauty, dancing, and good cheer who danced and sang alongside the Muses on Mount Olympus. Their names were various but they were usually called Aglaia, Thalea, and Euphrosyne. They were attendants of Aphrodite, and Aglaia was sometimes called the wife of Hephaistos. The Weird Sisters' connection to them is so far unclear, but the connection has been indicated by Greg Weisman. [11]

The Weird Sisters' names also link them to the moon, which has been traditionally associated with women in European myth, since Selene, Phoebe, and Luna were all moon-goddesses in Classical mythology (see the individual entries for each name for further information). The moon was also associated with Hecate, the goddess of witchcraft in Greek mythology, who was herself supposedly three-headed or three-faced, and whom Shakespeare links to the Weird Sisters in Macbeth - although most Shakespearean scholars believe that the Hecate scenes in that play are later interpolations by another hand. Finally, their three different apparent ages in "City of Stone" -- as children, young women, and hags -- echo the traditional Triptych or Three Ages of Women in European myth: the Maiden, the Mother, and the Crone (Greg Weisman has indicated that the reference was indeed deliberate). [12]