Difference between revisions of "Zafiro" 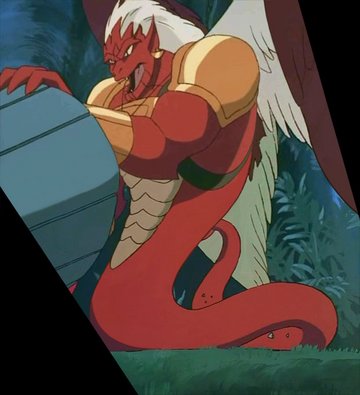 Zafiro - A gargoyle of the Mayan Clan, and currently its leader.

The gargoyle that would come to be known as Zafiro was hatched in ChacIxChel in 1918. At some point between his hatching and 1993, he became leader of the Clan and was also entrusted with the magical Sapphire Pendant linked to the Mayan Sun Amulet, thus receiving his name. By 1968, he and Obsidiana had probably become mates and laid their first egg that year. He and the three other pendant-wearers were away from the Pyramid in 1993 when poachers looted it and destroyed the clan. Fortunatly, the eggs in the rookery, including one Zafiro fathered, were unharmed and they are due to hatch in 1998.

Later, in 1996, he helped protect the rain forest in Guatemala from Cyberbiotics, and from Jackal and Hyena when they entered Preston Vogel’s employ. He remained behind in Guatemala with Obsidiana to protect "The Green" when Turquesa and Jade temporarily went to Avalon to plant some of the tropical plants in the clan’s charge there. He may later visit New York to recover the Mayan Sun Amulet, though how he would journey there is unknown.

Zafiro and Obsidiana will be the ancestors of Zafiro.

Zafiro differs from the other surviving gargoyles in his clan in that, instead of having two legs and leathery wings, he resembles a feathery winged serpent. Despite being the only surviving gargoyle with this snake-like body structure, it is apparently quite common among Mayan gargoyles, with at least half of the members having it, on average. The eggs due to hatch in 1998 will reflect this fact; most of them will have serpentine bodies as well. He is also the only surviving member of the clan to have white hair and a distinctly reptilian eyes and jaw. How common or rare these traits are is unknown, but one could assume they are not too unusual.

Zafiro’s appearance suggests that gargoyles of his variety in Central America could be the origin for the legends in that part of the world about flying serpents. In Mesoamerican legend, these flying serpents are known as couatl, and dwell in the depths of the rain forest. They are also linked to the legend of Quetzalcoatl, a culture-god of the Aztecs who was often depicted as a winged serpent. In the Gargoyles Universe, the story of Quetzalcoatl could well be a distorted memory of gargoyles that looked very much like Zafiro.