From GargWiki
(Redirected from Morgana la Fay)
Jump to: navigation, search
This is a canon-in-training article. Information in this article is subject to change before it becomes canon. 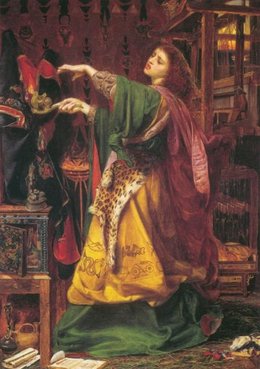 Morgana le Fay is King Arthur's half-sister (of a sort). [1] At various times (and depending on the source material) she has been his ally and one of his greatest enemies.

Morgana is actually not biologically related to Arthur at all, but is a Child of Oberon, a changeling who was unwittingly raised by Duke Gorlois of Cornwall and his wife Igraine after their real daughter (apparently Nimue) was stolen away by the Fair Folk, who left Morgana in her place; this is a secret at present, however, and not even Arthur knows of Morgana's true nature. [2] It is uncertain as to whether Morgana still hates Arthur, given that she has not seen him for a very long time (it is worth pointing out that she was one of the three women who bore him away to Avalon after the Battle of Camlann, alongside Nimue and the Lady of the Lake, which may suggest a change of heart where he is concerned); she has, however, definitely survived down to the present day. [3][4]

Morgana le Fay (more often known as Morgan le Fay; presumably the above spelling was adopted for the Gargoyles Universe to avoid confusion with Officer Morgan) appears fairly often in Arthurian romance as a powerful sorceress. She was not, in the early legends, Arthur's enemy, but in fact, receives him on Avalon to heal him. But later on, perhaps under the influence of a Christian Church hostile towards magic, she became darkened into an evil sorceress and one of the leading villains of the legend.

In the more-or-less finalized version of the story as Malory tells it, Morgana was King Arthur's half-sister, the daughter of his mother Igraine by her first marriage to Duke Gorlois of Cornwall. After Uther married Igraine upon Gorlois' death, Morgana's older two sisters, Morgause and Elaine, were married off to King Lot of Lothian and Orkney and King Nentres of Garlot respectively, but Morgana was too young to be given in marriage at the time, and so was put to school in a nunnery, where she somehow learned magic.

When she grew up, she was married to King Uriens of Gore, and had a son by him, Sir Uwaine (or Yvain, or Owain, depending on what version of the story one reads), who became a noteworthy knight of the Round Table. (Uriens and Uwaine are based on the historical King Urien of Rheged and his son Owain, prominent warrior-heroes of northern Britain in the late 6th century and anachronistically moved to King Arthur's time, a century before, although Morgana herself seems to be mythical or fictional rather than historical in origin.

Morgana conceived a hatred for Arthur, and attempted twice to kill him (according to Malory, this was because she wished to rule Britain herself, but modern-day writers such as T. H. White have portrayed her as motivated by a family feud, hating Arthur because her father Gorlois had been slain fighting against Uther and her mother been forced to marry Uther, and wishing to avenge her parents' wrongs upon him). The first time, she stole Excalibur from him, substituted a worthless duplicate in its place, and then gave the real Excalibur to a knight named Sir Accolon of Gaul, whom she tricked into fighting Arthur with it; the second time, she sent Arthur a magical cloak as a peace offering which would burn up whoever wore it. On both occasions, however, the enchantress Nimue came to Arthur's aid and foiled Morgana's scheme. Afterwards, Morgana no longer made serious war upon Arthur, but contented herself with capturing and attempting to seduce various of his knights, including Sir Lancelot, or trying (always unsuccessfully) to expose Lancelot's love affair with Queen Guinevere. In her final appearance in Malory's book, however, she reverts to her original "ally" role, bearing Arthur away to Avalon after his final battle, as one of the three mysterious women in the boat (as has also been the case in the Gargoyles Universe).