The Goliath Chronicles
Information in this article is apocryphal and should not be considered canon. 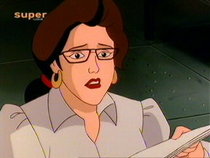 Amy Schlimmer was a public defense attorney who appeared in the apocryphal episode "And Justice For All". When Goliath was arrested for attempting to rob a jewelry store, he turned down Xanatos's offer to for a lawyer so he could work with the public defender.

Amy Schlimmer was an ineffectual attorney. She did not win the case, and Goliath was only declared innocent after he broke the rules of the court and apprehended the criminal on his own, contradicting the entire premise of the episode.