From GargWiki
(Redirected from Edinburgh)
Jump to: navigation, search 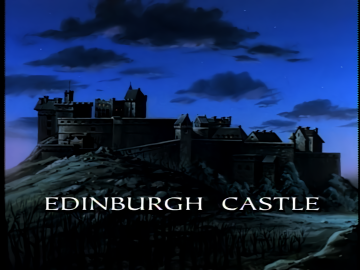 Edinburgh Castle was a royal castle in Scotland. Later the surrounding lands were transformed into a large community and Edinburgh became the capital city of Scotland.

Prince Malcolm was born at the castle in 954. During King Indulf's rule, Malcom and his mother, Queen Katharine, were held prisoner within Edinburgh Castle until Indulf's forced abdication in 962. ("Once Upon A Time There Were Three Brothers...")

After the fall of Castle Wyvern, Princess Katharine, the Magus, Tom and Mary brought the gargoyle eggs here, when Kenneth II ruled. Soon after, Constantine III murdered Kenneth II and was later crowned at the castle. ("Avalon" Part One)

Prince Duncan resided here during the 11th century, plotting his schemes against Clan Moray within its walls. ("City of Stone" Part One & Part Two)

In 1996, the Stone of Destiny was brought here, upon its return to Scotland. ("Rock of Ages")