From GargWiki
(Redirected from Ekidne)
Jump to: navigation, search 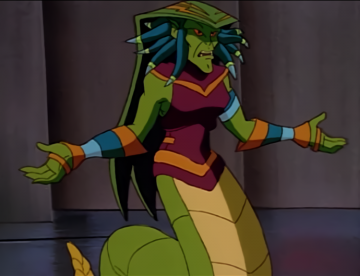 Ekidna is a female New Olympian.

Ekidna is particularly suspicious of, and ill-disposed towards humans. ("The New Olympians") After New Olympus makes contact with the outside world, she will be the leader of an isolationist faction that wants nothing to do with the humans. Members include her daughter Medusa (although reluctantly), Kiron, as well as most members of Sphinx's family. [1][2]

Ekidna is named after Echidna, the mate of the monstrous giant Typhon in Greek mythology. Echidna looked like a beautiful human woman from the waist up, but like a snake from the waist down. She was the mother by Typhon of many of the monsters of Greek myth, including the Nemean Lion, the Lernean Hydra, the Sphinx, Cerberus, and the Chimera. She was finally slain by Argus, a hundred-eyed giant.

Echidna was one of the Drakainai of Greek Mythology, which were all nymphs with snake bodies instead of legs.