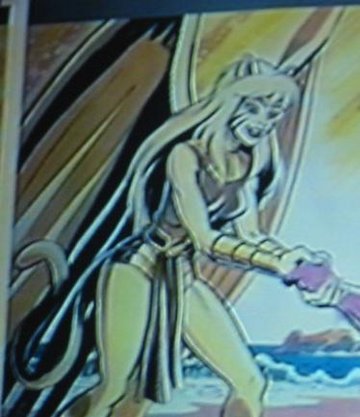 Sphinx is a New Olympian girl, and one of several protagonists of the unmade spin-off The New Olympians.

Sphinx rescued Terry Chung from drowning when his boat was endangered by a storm, and afterwards brought him to New Olympus. When the New Olympians decided to make contact with the outside world, Sphinx accompanied Taurus, Talos, and Terry to the United Nations Building in New York as the New Olympian delegation. [1]

Sphinx is one of those New Olympians in favor of making peace with the humans, and eventually enteres into a Romeo-and-Juliet-style relationship with Terry, to the alarm and disapproval of many humans and New Olympians alike. [2][3]

Sphinx looks like a young blond-haired, gargoyle-like woman with feathered wings and some mildly feline features, including a tail. Despite the superficial similarities, Sphinx is not a gargoyle, but a pure New Olympian. Her wings enable her to actually fly, not just glide as gargoyles do. She is at least strong enough to carry Terry while she is flying. [4] Before meeting Terry, she was a student. [5]

(Terry mistakes her for an angel when she first appears to rescue him at sea). [6]

Sphinx is named after the original Sphinx of Greek mythology, which resembled a winged lioness with a woman's head, one of the many offspring of Echidna. It perched atop a great rock overlooking the road to Thebes, and asked everyone who passed by it on the way to that city a riddle: "What has four legs in the morning, two legs at noon, and three legs in the evening?" If they could not answer the riddle correctly, it devoured and ate them. At last, the young Oedipus encountered the Sphinx on his way to Thebes, and correctly solved the riddle: the answer was man, for an infant crawls on all fours, a grown man stands upright, and an old man uses a cane. The enraged Sphinx promptly threw itself off the rock to its death. Presumably, the present-day Sphinx is a much more pleasant person than her mythological namesake.