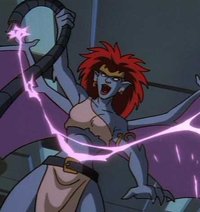 Demona is a gargoyle and perhaps one of the most dangerous beings on Earth. Her main goal in life is the complete annihilation of humanity and she has gone to extreme lengths to reach her objective. She uses science and sorcery, often in combination, and will ally with any gargoyle, Third Race or even human that she can use to wipe out any and all humans. Due to interactions with the Third Race and Macbeth she is immortal and becomes human during the day, an indignity she endures for its usefulness.

But beneath her tough facade, Demona is truly her own worst enemy. She is one of the few rogue gargoyles in the world, choosing to live apart from a gargoyle clan. She hides her loneliness and pushes her guilt unto others. Her actions have driven away those who would've been closest to her; Macbeth, her one-time closest ally, Goliath, who was once her mate and, most painfully, her biological daughter, Angela. (more...)