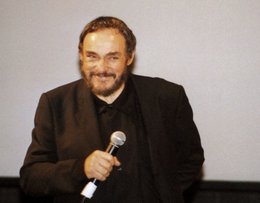 John Rhys-Davies was the voice actor for Macbeth. Outside of Gargoyles, he is best known for the roles of Gimli in Peter Jackson's The Lord of the Rings trilogy and Sallah in the Indiana Jones movies while also hosting an educational series called Archeology. (He also voiced Treebeard the Ent in The Lord of the Rings trilogy - appropriately, since J. R. R. Tolkien once said that the Ents were partly inspired by his ideas on how Birnam Wood's march on Dunsinane should have been handled by Shakespeare.)

John Rhys-Davies is one of several Gargoyles actors who has also appeared as a character in the Star Trek franchise, in this case as Leonardo da Vinci in episodes of Star Trek: Voyager. However, he appeared in Gargoyles before his first appearance in Voyager.

He also voiced Professor Beasthead in the Freakazoid! episode "Tomb of Invisibo".

During production of "City of Stone", John-Rhys Davies expressed some surprise at the differences in the story from Shakespeare's Macbeth, and called Greg Weisman "revisionist." Greg explained that the traditional legend that Shakespeare followed was in fact revisionist, and that the Gargoyles team were hewing closer to the "historical truth". Once he heard that, he got very enthusiastic about it. [1]