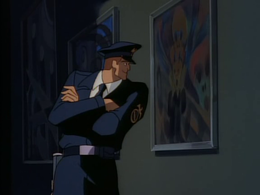 The Museum of Modern Art Guard was a security guard who was making the rounds and admiring Edvard Munch's The Scream when Xanatos broke in wearing his battle armor to steal the Eye of Odin, which he had donated earlier that day. The guard was easily overpowered by Xanatos.

Greg Weisman characterized the Museum of Modern Art as having poor security, most likely since they only had one guard on duty. The museum's poor security, but excellent surveillance cameras is why Xanatos chose to donate the Eye there. [1]