From GargWiki
(Redirected from Norman ambassador)
Jump to: navigation, search 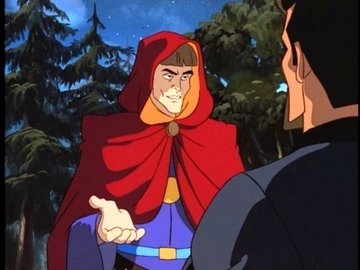 The Norman Ambassador was a Norman nobleman (whose real name is unknown) in the late 10th century, and member of the Illuminati.

In 975, the Norman Ambassador escorted Princess Elena to Castle Wyvern so she could marry Prince Malcolm (like Elena, he too was unaware of the true nature of the princess's dowry). [2] On the journey, Elena and the Ambassador were rescued from the Archmage's bandits by a time-travelling Xanatos. Recognizing Xanatos from his badge as a fellow Illuminatus, he accepted him and his companions into his party, and afterwards delivered Xanatos's instructions to the Illuminati for sending him the rare coin in 1975 that he would need for the foundations of his wealth, and his account of his time travel adventure in 1995. ("Vows")