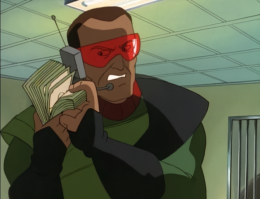 The leader of the mercenaries.

Sevarius's Mercenaries were a group of mercenaries for hire who boasted that for the right price, they could lift the Venus De Milo out of the Louvre.

As part of his scheme to escape from Xanatos and steal $20 Million from him in the process, Thailog sent Sevarius an e-mail from Xanatos's office, ordering him to hire mercenaries to steal him while he slept as stone. Sevarius, believing this was a scheme of Xanatos's that Thailog was in on, complied.

Sevarius paid the mercenaries $50,000 with the rest of the balance to be paid upon completion. The group stole Thailog's stone body from the Eyrie Building during the day and brought him to Black Rock Point that very night, where, upon breaking free, Thailog ambushed and killed them. [2] ("Double Jeopardy") 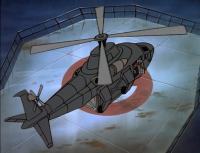 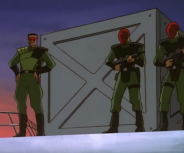 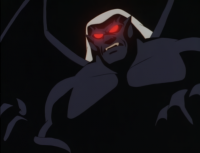 In his ramble for the episode "Double Jeopardy", Greg Weisman refers to the lead mercenary as "Arnold", because Jeff Bennett did an Arnold Schwarzenegger impersonation to play the character.