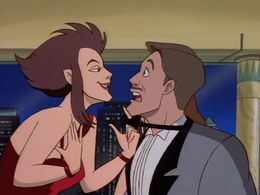 Remember this at the trial, kids.

The Star-struck Pack Fan is human who was at the Diamond Exchange the night Jackal and Hyena robbed it.

Jackal and Hyena were still fuming over how Xanatos bought the Coyote Diamond out from under their noses just as they were about to steal it. The star-struck Pack fan recognized them and asked if they were on the television show, The Pack. Hyena confirmed that they were and asked the fan if wanted her autograph written on his face. She then brandished her knife and cut his bow tie.