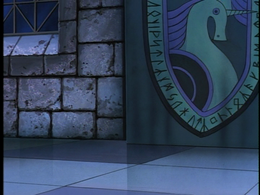 The tapestry is hanging in Castle Wyvern in front of a secret passageway. It was slightly damaged by Bronx when he clawed at it after smelling Demona behind it.

According to Xanatos, the tapestry is quite rare and valuable and he was concerned that Bronx would damage it further. The tapestry is green with an image of a unicorn, but its maker and country of origin is unknown. ("City of Stone" Part Three)