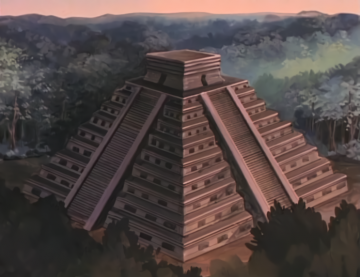 The Mayan Pyramid is an ancient structure located in the rain forests of Guatemala. It also serves as the home of the Mayan Clan.

The Pyramid is over a thousand years old, and has probably been the home of the Mayan Clan most or all of its existence. While it is unclear whether the structure was built specifically for the gargoyles or not, one could assume that there is currently a rookery inside or beneath the Pyramid. [1][2] There are also hieroglyphics that show the formation of the Mayan Sun Amulet inscribed on the side of the building.

In 1993, a group of poachers looted the Pyramid and destroyed the clan while they slept. Since then, the four pendant wearers keep watch over the Pyramid and the forest, day and night. ("The Green")