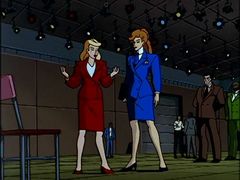 Shauna Coyle-Herman chatting with Fox, while the baby and rabbit are causing who knows how much trouble.

April Terri Winchell is an American voice actress and is daughter of Paul Winchell.

Some of her known roles include Mrs. Herman in Who Framed Roger Rabbit's & the Roger Rabbit's cartoon shorts, Peg Pete in Goof Troops and Clarabow Cow since the 90s. She also voiced Muriel Finster in the cartoon Recess and the Lilo & Stitch/Recess crossover episode "Lax".

Roles on Gargoyles: The Goliath Chronicles