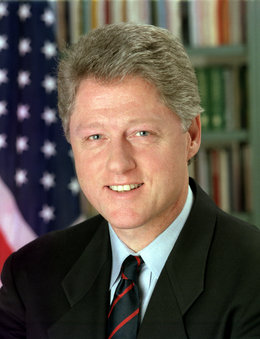 William Jefferson "Bill" Clinton (August 19, 1946 -) was the forty-second President of the United States of America. His wife, Hillary Rodham Clinton, was the Secretary of State in the first Barack Obama administration and was the 2016 Democratic nominee for President.

President Clinton hosted a Halloween ball in the White House in 1996, for which Mr. Duval arranged for David Xanatos to receive an invitation. ("Invitation Only") [1] While there, Xanatos had a private meeting with White House Chief Steward, Quincy Hemings. Other guests included Ambassador Amanda Chung. ("Masque", "Bash")

President Clinton was never identified by name within the Gargoyles comic book. This was due to Greg Weisman wanting to keep the date somewhat vague so the comic would not seem dated. [2] With the comic book currently taking place in 1996, it is obvious who the President was.