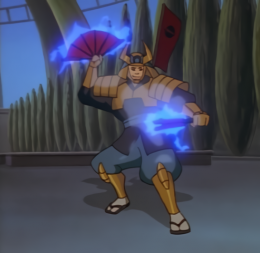 Taro showing off his electrified fans.

Shaped like Japanese folding fans, they could become electrified and blast electricity. Where Taro acquired them is unknown. They had enough power to stun Goliath and Yama. In single combat with Taro, Yama was able to force the fans together causing them to explode.

Taro's weapons in the "Bushido" script were originally electro-disks on his palms, but director Dennis Woodyard and his team changed it. [1]