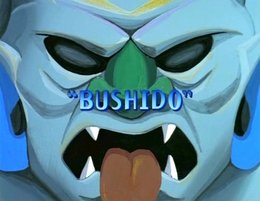 "Bushido" is the fifty-third televised episode of the series Gargoyles, and the fortieth episode of Season 2. It originally aired on February 20, 1996.

Avalon brings the four travellers to the small village of Ishimura in Japan, where a large clan of gargoyles live with some human villagers. The Ishimuran businessman, Taro, teams up with the gargoyle Yama in planning and constructing an amusement park for the clan to live in , and be slowly revealed to humans. The gargoyles, including Goliath, Angela, and Bronx, are abducted by a band of hired ninjas from Ishimura during the day and brought to the park. Taro tells the gargoyles that they can choose to leave anytime, but that he had invited a group of children to meet them. He begins to escort Goliath, Angela, and Bronx out, but then traps them and chains them up, and he keeps the others from leaving. Elisa and Hiroshi figure out where the gargoyles have been taken and release them, and Yama challenges Taro after he realizes that the businessman was planning to use the park for personal gain. The clan escapes back to Ishimura, and Taro is humiliated in front of the press.

The gargoyles and humans of Ishimura decide to start teaching Bushido to the younger generations once again.

Yama feels that he has betrayed his clan, and he starts a quest for redemption in Gargoyles: Bad Guys.

The Ishimura Clan is introduced, and Yama is banished from the clan at the end of the episode. Yama reappears as a member of the Redemption Squad in the spin-off series Gargoyles: Bad Guys. Yama's next appearance is in the first issue of that series, "Strangers", although his full introduction is in the second issue, "The Lost".

The production team briefly considered having the inhabitants of Ishimura speak in Japanese (with English subtitles) before Goliath and his friends arrived, but finally abandoned the idea as too expensive.

Among the settings in Taro's theme park are not only the Ishimura temple, but also Notre Dame Cathedral and a castle that looks strikingly similar to Castle Wyvern, but is actually modeled to look like Edinburgh Castle.

The Ishimura gargoyles are partly modelled upon the tengu, a race of winged beings in Japanese legend that sometimes taught humans bushido, matching the series policy of linking gargoyles to various legends (as found in "M.I.A.", "The Hound of Ulster", and "The Green"). The tengu were also portrayed in Japanese legend as mischievous tricksters with magical abilities, traits that sound more evocative of Oberon's Children and certainly do not fit the Ishimura Clan at all - but legends have a way of distorting the truth. This source of inspiration became explicit for the first time in "Strangers", when Robyn Canmore referred to Yama as a tengu, followed by Dingo's realization in "The Lost" that "tengu" is Japanese for "gargoyle".

During the scene where Elisa and Hiroshi rig the jeep to ram into Taro's dome, the close-up of Elisa jamming the gas pedal was removed from the episode.