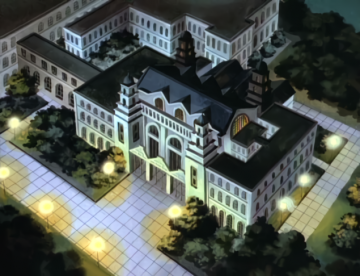 Ellis Island is an island-museum in the Hudson River north of the Statue of Liberty. The Manhattan Clan chased Coldstone to Ellis Island when the cybernetic reanimated gargoyle was infected with a powerful government computer virus.

Matt Bluestone pursued the gargoyles to the island with a SWAT Team, but all they found were the remains of RECAP. ("Legion")

Ellis Island in New York Harbor was the gateway for millions of immigrants to the United States as the site of the nation's busiest immigration station from 1892 to 1954. Prior to that, the much smaller original island was the site of Fort Gibson and later a naval magazine. The island was greatly expanded with landfill between 1892 and 1934. Since 1990, restored buildings on the island host a museum of immigration run by the National Park Service as part of Statue of Liberty National Monument. A 1998 United States Supreme Court decision found most of the island to be part of New Jersey.