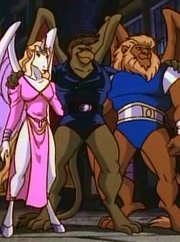 The London Clan is a clan of gargoyles residing in and near London, England. They are one of the most ancient clans in existence by 1996. They own a small magic store in Soho called Into The Mystic and have a large, rural estate called Knight's Spur outside the city.

The gargoyles of the London Clan resemble beasts of heraldry. They are one of the most successful clans and continued to live right under the noses of humanity long after it became common knowledge that the English had rid their lands of gargoyles. The London Clan has been so successful that they have had to deliberately limit their population growth to be sure they do not outgrow Knight's Spur.

The London Clan seems to have had much contact with humans and has been involved in numerous human activities over the centuries including various events in the life of King Arthur, World War II and the moving of the Stone of Destiny in 1996. (more...)