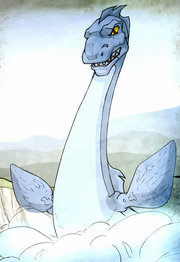 The Loch Ness Monsters are a species of plesiosaur-like creatures inhabiting Loch Ness in Scotland. They seem to have lived in the deep and dark lake since antiquity and Saint Columba encountered and tamed one in the 6th Century.

In modern times, the creatures continue to live in the Loch. Most humans have come to believe that they are no more than local legends, and "Monster Tours" are offered to tourists eager to spot "Nessie". In fact, there is more than one of the animals in the Loch. At least one family group lives there as of 1996.

Doctor Sevarius and Xanatos' Commandos came to the Loch and managed to catch one of the creatures, but thanks to Goliath, Angela, Elisa Maza, and Bronx, the creature (a female called Nessie) was released and the animals were left in peace. (more...)