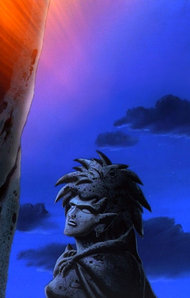 "City of Stone" Part One is the twenty-second televised episode of the Gargoyles TV series and the first episode of a four-part arc. It originally aired on September 18, 1995. The episode, and the "City of Stone" series as a whole, is widely regarded for its powerful story-telling and poignant character moments. The mixture of historical events with literary influences and original ideas seen in the "City of Stone" four-parter would later be seen again in "The Rock", "Rock & Roll", and "Rock of Ages".

The episode is perhaps most widely recognized for introducing the Weird Sisters and the Hunter. It also finally provides the full explanation for how Demona survived the Wyvern Massacre and first met Macbeth. (more...)