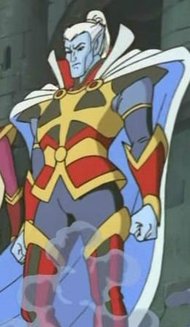 Oberon's strong magical abilities allow him to reign over the Third Race and control them despite many of their own powerful abilities. He once froze Odin in place and completely removed Banshee's use of her voice. Despite his power, Oberon, like all of the Third Race, has some weaknesses. His energy is not infinite and if he can be forced to use up enough of it, he can be temporarily weakened. The greatest threat to him, however, is iron. His magic cannot affect the material and using iron against him as a weapon, can greatly hurt him. The Avalon Clan used this weakness when Oberon demanded they leave Avalon. They constructed an iron bell which, when struck several times, nearly killed Oberon. Their decision to allow Oberon to live resulted in their being named the Honor Guard of Avalon. (more...)