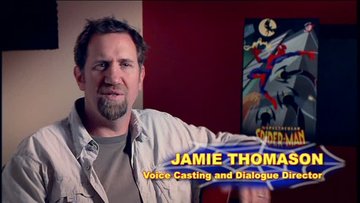 Jamie Thomason on "The Spectacular Spider-Man: The Complete First Season" DVD. Ask about the pageboy haircut he had when he worked on Gargoyles.

He's continued to work with Greg Weisman as the voice director for both The Spectacular Spider-Man and Young Justice.

Jamie Thomason once bet Greg Weisman that he could not work Jalapeña into a script. He lost the bet. [1]