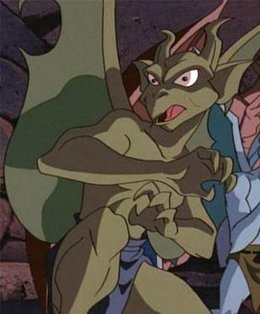 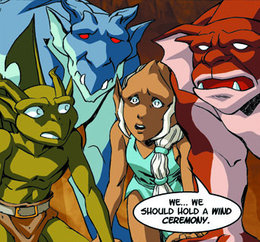 Chaw and Chomp (top) and Kermit and True (bottom).

"Kermit" was a male gargoyle of Demona's Clan. He never had a true name, but "Kermit" is used to identify him.

Kermit hatched in 978 in the rookery of the Wyvern Clan with his rookery siblings, including "True", and the beast later to be named Bronx.

Though the exact details are currently unknown, Kermit left the Wyvern Clan to join the Wyvern Splinter Clan when it was formed sometime between 988 and 994. [1] He somehow managed to escape whatever fate befell the rest of his clan along with a few other gargoyles who eventually joined the Lunfanan Cell of Demona's Clan.

He was not present at the Battle of Rathveramoen due to his young age, but as he grew older he became a warrior among Demona's Clan. He and the clan would raid human food stores to survive. ("Tyrants", "City of Stone" Part One)

In 1040, Kermit survived an attack on the clan in their cave roost by Duncan and his men. The clan was forced to move to a new lair and a new territory. ("City of Stone" Part Three)

Shortly thereafter, the clan assisted Macbeth in his battle against Duncan and after they defeated him, Macbeth placed the clan under his protection, hoping for a new golden age between humans and gargoyles. Kermit was actually present when Macbeth was crowned King of Scotland and Demona was named and appointed Macbeth's primary advisor, an event which clearly pleased him a great deal.

Unfortunately this time of happiness would not last. Only seventeen years later, in 1057, the clan was at war with humans again, this time with Canmore and his English allies. Kermit continued to fight alongside his clan. Sadly, Demona betrayed Macbeth to Canmore, giving Canmore the opportunity to betray her. Canmore and his men destroyed Kermit and the rest of the clan, leaving Demona alone. ("City of Stone" Part Four)

Kermit was a small-statured gargoyle who was green in color. He had very simple wings, a small beak and two horns. He was hairless.

This character was referred to as "Kermit" in the scripts for the comics he appears in. Like "Othello", "Desdemona", and "Iago", it is a non-canon name which is never used in the actual comics. Calling him "Kermit" was probably just simpler than calling him "Little Green Gargoyle" or the like when his name had to be typed repeatedly. Clearly Greg Weisman gave him this name as his appearance is evocative of "Kermit the Frog".

In "City of Stone" Part Three, Kermit is shown to be destroyed by Duncan while sleeping as stone, moments later however, he is seen escaping the cave with Demona and the other survivors and is seen again in "City of Stone" Part Four. It is generally assumed that this was a simple animation error and that Kermit survived until 1057 as is shown.

Of all the character models for the gargoyles of Demona's Clan seen in "City of Stone", Kermit's is the only one not later reused in the "Avalon" three-parter. It is not known why his model was not used, but from an in-universe perspective it does make some sense. The explanation for the character models seen on Avalon is that they are the biological children of the members of Demona's Clan. As Kermit was far too young to sire one of the "Eggs", it makes sense that no gargoyle bearing his resemblance was seen on the island.