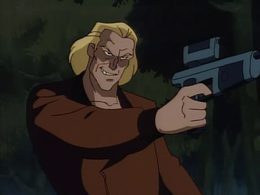 The Particle Beam Gun-Toting Mugger bought his gun from Glasses.

He attempted to rob a man at gunpoint before Broadway stopped him. Broadway crushed the mugger’s gun and made him give up Glasses’ name and location. Broadway then threw the mugger to the ground and left. ("Deadly Force")