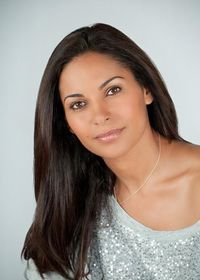 Salli Richardson is the voice actress for Elisa Maza on Gargoyles.

Classy, graceful, & intelligent, Salli Elise Richardson was born November 23, 1967, in Chicago, Illinois. Salli's acting career was first nurtured in the theater and ever since, she has been on a non-stop journey to success. Her first feature performance was in 1991 as Denise in Up Against the Wall. However, her breakthrough role was in 1993's, How U Like Me Now, which received favorable reviews. She also played Fenna in the Star Trek: Deep Space Nine episode "Second Sight". Today, Salli is widely-known as the voice of Elisa in the cartoon series Gargoyles. So, be sure to look out for Salli in a variety of upcoming roles because her presence & star quality will continue to shine beyond recognition.

Since 2006, Salli Elise Richardson has played Allison Blake, one of the main characters on the Science Fiction show Eureka.